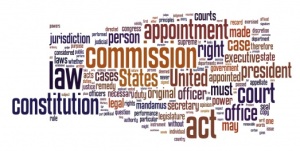 On the Daily Beast, Professor David Dow — a brilliant man and storied advocate against the death penalty — argues that President Obama should consider impeaching Supreme Court justices, if the Court votes to invalidate the individual mandate. I respectfully disagree: for one, even if Thomas Jefferson considered the same, Jefferson was a bit of a wild card when it came to the Court. His many letters against Marbury v. Madison are regularly quoted by conservatives as proof that judicial review is contrary to the Constitution, even though his  clearest expression of this sentiment was motivated by partisanship, and also clearly wrong (Marbury‘s explication of judicial review is holding, not dicta). And, impeaching a justice for voting the wrong way would be a more blatant and extreme assault on the Court’s legitimacy than the right has ever even contemplated. Justice O’Connor is right on this point. To the extent that we want to pick a fight with the Court at all, we should limit the fight to the justices, not the institution. Impeachment implicates both.

Separately, though, Professor Dow’s explanation of the mandate’s constitutionality is (especially by incorporating Akhil Amar) one of the best I’ve read yet, and clearly prevails over his detractor, a writer who actually refers to an article by Ann Coulter as “eye-opening.” Indeed. Oh, and, full disclosure — I was once took a class taught by Professor Dow, an equal protection seminar at Rice in 2005. The man is a genius, and a rough grader. He gave me a B+, I think, and I was happy to get it.

← Starting from Scratch: How Would a New America Solve the Tax Problem?
Presumed Constitutionality →