Try as I might, I just can’t get excited about FourSquare. Who wants to be Mayor of a Starbucks, or whatever? Ugh. But “World of FourCraft” — a FourSquare hack that counts “check-ins” as troop deployment in a city-wide game of Risk, well, that’s something else. Functionally, you pledge allegiance to a specific borough, and then, your check-ins citywide count for establishing your borough’s “control” over other parts of the city. 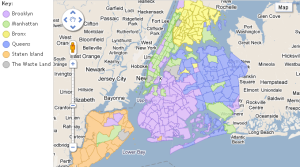 Now, I’m sitting in Manhattan — real New York — but let’s do the Brooklyn thing and aggressively over-analyze. While wearing oversize sunglasses. As of today, the map shows Brooklyn with isolated incursions into New York, and vice versa. Let’s assume you “pledge allegiance” to the borough you live in. What the creators have made, then — aside from an actually interesting use for FourSquare — is a social experiment demonstrating how a self-selected group of people live their lives in New York. To wit, Manhattanites spend more time in DUMBO than Brooklyners, but Brooklyners spend more time in the Upper West Side than Manhattanites.

That last bit sounds wrong: maybe people who live on the Upper West just don’t use FourSquare. That is an obvious limitation on the technology. But, enjoy!